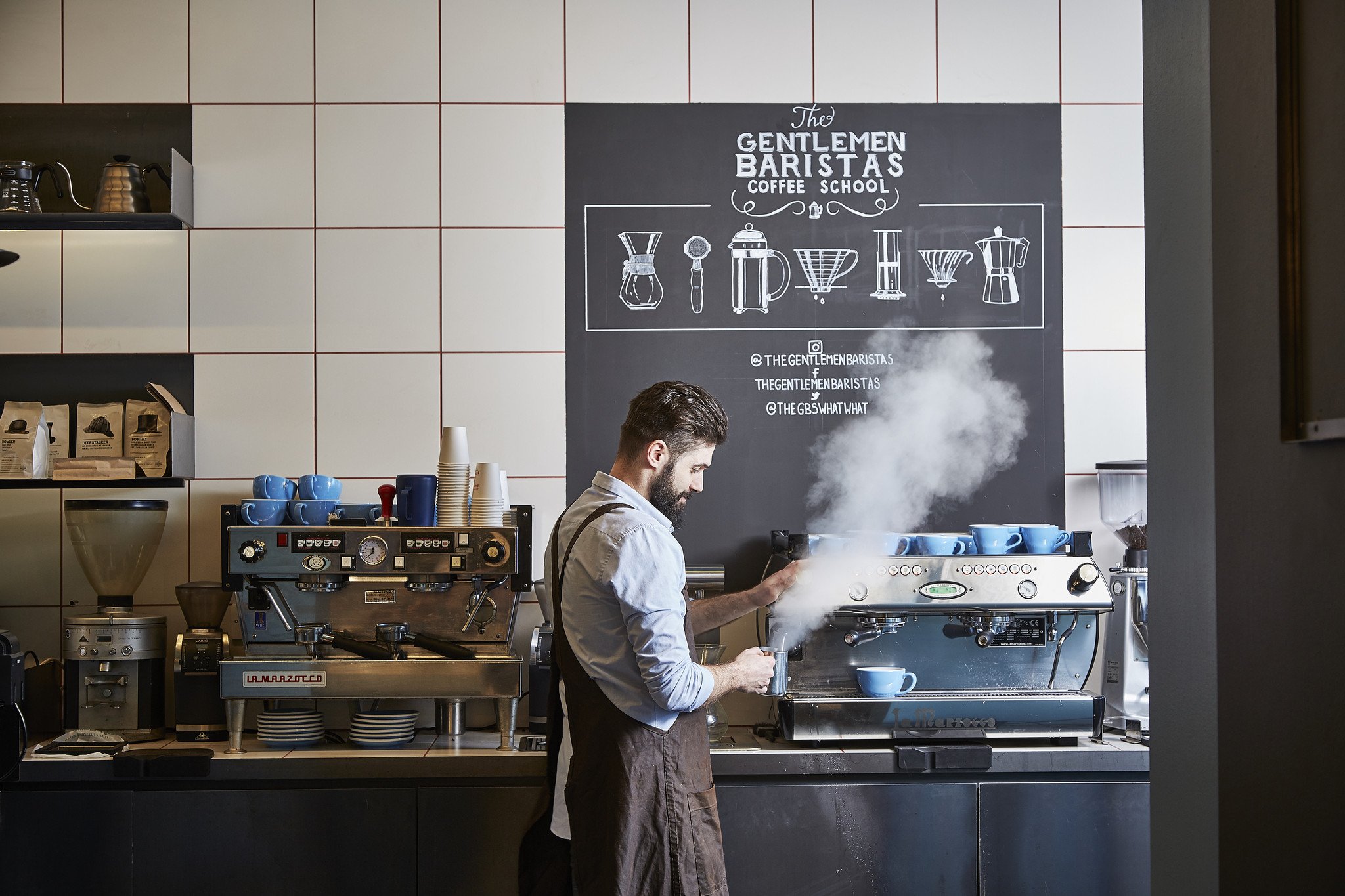 Bartenders superstars, glass ampoules, showbrewing: the new global slow coffee mania is hipster and anglo-saxon. But, when it comes to coffee, Italy still has a lot to say..

“This has a floral taste, an almost tropical, pronounced greed.” The language comes from oenology but the liquid that the bartender pours into the glass is black and steaming. In the Slow Coffee corner of the newborn Coffe Design, Lavazza’s flagship in Milan, near the Duomo, it seems to be in one of those locations in San Francisco or New York – think of Blue Bottle or Intelligentsia – where in order to have a coffee have to attend a showbrewing performance. Only here, those who select the perfect water, bring it to the exact temperature and pour it into filters filled with freshly mixed blends are not bearded, tattooed guys or ladies with pink hair but bartenders in white shirts and waistcoats.

The new coffee culture has landed in Italy. Although new is not perhaps the best word to describe this phenomenon that with its ampoules, glass jugs, pharmacist cabinets, and brass scales seems more like a revival. Yet it is this very vintage atmosphere that makes it exquisitely contemporary: in line, that is, with that desire for slowness, history and authenticity (purposefully designed) that drives younger people to listen to Spotify but to buy vinyls, to become selfie with the smartphone dreaming of polaroids. They call it Third Wave. That of the “artisan” cup, made with grains grown on sustainable farms and prepared by bartenders who masterfully handle mixtures, toasting, pressure and duration of extraction. It is the Slow Coffee, extracted with grandparents’ machines (such as syphon, Chemex, Toddy for cold-brew, moka) or invented more recently (such as aeropress or V60 cone for coffee filter the pour over, born more or less a decade ago). It is the gourmet coffee segment, for connoisseurs, which includes the espresso, which is indeed experiencing a golden moment (between 2009 and 2014 the turnover of the companies of the Italian Manufacturers Association Espresso Coffee Machines and Equipments has doubled, + 220%, Assofoodtec data). In the coffee universe, the gourmet segment (which has premium pricing and niche numbers, but exponential growth) is at the extreme opposite of the instant (low cost and chewy sales, especially in new markets such as China). Between these two extremes there is everything: from the Italian-sounding recipes of Starbucks (Frappuccini, Lattes, Mochas and so on) to the last crazy mania that strikes on Instagram (Bulletproof coffee, filled with – braze yourselves! – MCT oil), from the supertrendy cold brew (the international version our Italian caffé freddo) to the nitro spumeggino (served on the plug, like beer).

It is a menu that in Italy we consider exotic yet also in our country, next to the espresso shot, in the last three years other recipes have grown with double digits: such as barley coffee, ginseng, and cold creams (data: Host Observatory). A sign that even Italian consumers now want to experiment.

It is almost paradoxical that the new coffee culture comes from the United States and that it comes with years of delay from us, the coffee homeland, the creators of Bialetti and the espresso, the country that turned the first morning caffeine shot into a cult. An exaggeration? Not really, since the art of mixing, combining different typologies and origins, was born in Lavazza at the end of the 19th century, while IllyCaffè was inventing (in the 1930s) the first espresso machine, the pressurized conservation system, and even the capsules (70s). But despite the fact that we are really good at creating the new ideas and perfecting them, there is no doubt that the craft coffee narrative is firmly in the hands of the Americans.

Thus wrote in 2008 Jonathan Gold of LA Weekly and Pulitzer Prize for Critic Journalism: “Coffee has colonized America at the end of the eighteenth century and after the second wave of pop recipes and global coverage with Peet’s and Starbucks, we are entering the third stage, that of connaisseurs: people who are interested in plantations more than in the country of origin, and consider roasting a slow art to exalt every grain, seeking clean, strong and honest flavors. ”

Just look around in the big metropolis to see them: young busy-cool professionals, happy to pay double for Mount Espresso at the Kaboola Kitchen Café in London because it was roasted in a sustainable Brixton roasting; to savor the $ 5 Mocha espresso from Blue Bottle, a “place for humans” where you better not come if you are in a hurry. For now, it is only in San Francisco, LA, New York, Washington, and Tokyo, but Nestlé – who has just paid $ 700 million to get 68% of the coffee snobs’ brand – will be happy to be happy make it land somewhere everywhere, following a Starbucks style approach. And in addition to the social networks (while we write, on Instagram #coffee has double the posts of #fashionblogger) to viral the new coffee culture there is also the job market, mostly made of freelance: where the difference between being and cool, it also goes through networking, such as Timber Yard in London, Workshop Coffee in San Francisco, or Ground Support at Spring Street in New York.

“It’s a market driven by Anglo-Saxon countries and led by young people, especially males,” says Jonny Forsyth, Mintel’s Global Research Drinks Analyst. “In the United States, 28% of 18-34 year-olds are called coffee snobs, ready to pay for quality. A niche (in rapid growth, in 2016, 59% of cups sold in USA was gourmet) which is very significant: on the one hand because it is consumers of the future, on the other because the trend – told on media, movies, clips music and social media – pushes the image of coffee as a sophisticated beverage into high-growth countries.

” Like China, where it still accounts for only 10% of the hot beverage market, with tea always in the forefront, coffee grows by 18% annually (Euromonitor). Drinking it, for the Chinese, is synonymous with a social and cultural climb: the first step is to choose the instant (the segment that sees Nescafé as absolute leader), then go to the filtre and finally indulge in the “luxury cup” to drink at the table. There is obviously Starbucks to offer it, 1,700 shops in 90 cities (it will reach 3,000 by 2019), but also Italy-inspired but actually British Costa (344 outlets, 900 by 2020). And, in the face of heritage and “authenticity”, these giants are happy to chirp to hit the mark: offering ad hoc recipes (the Macha Tea Frappuccino) and even changing their name (on Sina Weibo, the local Facebook, Starbucks is called Papa Star). Their competition is mainly South Korean: because Chinese teenagers, K-pop fanatics, adore their chains Cafe Well, Maan Coffee and Tous les jours, which among home decorations, trees, shelves full of used books and vintage armchairs , look like homes rather than the chains they really are. “In a Korean coffee shop you do not buy a coffee but a ticket to Seoul’s glamour,” writes Whatsonweibo, the trend-watching site of Dutch Synologist Manya Koetse.

And what about Italy? For our country there are good and bad news at the same time, according to Forsyth. “Italian products have tremendous potential, they are a perfect expression of what Millennials wants: they are perceived as sophisticated luxury, ancient roots, but contemporary look. And their stories are true, not invented by marketing”. Yet… “Coffee shops are the new influencers and brands such as Starbucks, Costa and even McCafé have a huge advantage in communicating the new coffee experience. The risk for Italy is to be cut off due to the lack of a global showcase. “

Italian giants know this very well. In fact, instead of resting on laurels, as business goes on swollen sails (Lavazza, 2 billion in turnover, is number 3 in the world and IllyCaffè, 460 million in 2016, up by 5.3% over 2015, is at top in the high end of the market) are committed firsthand to start circulating in the world an Italian version (and not Italian sounding) of coffee mania. And perhaps the announcement that Starbucks will open its first Italian outlet in Milan (2018) has accelerated the race to occupy the most “in” spaces of the city and show off craftsmanship and innovation, in tandem with the other great tradition made in Italy: food . But no trivial sandwiches will be offered here. At the aforementioned Coffee Design by Lavazza in Piazza San Fedele (a flagship that will soon be followed by others in London, Paris, Moscow, Berlin and other capitals) the menu includes Coffee Caviar, Crostini Kamut and Coffee with Sweet ‘n’ Crispy Bacon), Caffel Soup, Truffle Chips, Coffee Pop Sweet Cakes: all inventions of the Lavazza Corporate Training Center, which since 1998 (and in collaboration with Albert Adrià, Ferran’s brother who created for Lavazza the first solid coffee) turns espresso into every possible state, from liquid to foam, waffle and jelly. “It’s a menu we’ve always kept” for us, “displaying it at events, meetings, and that we now make available for the public,” explains Chief Marketing Officer Sergio Cravero. In addition to the food and showcooking area, there is an area for roasting raw coffee where the art of mixing (invented by Luigi Lavazza in 1895) is also explained, a Cafeteria area with local interpretations of the Northern Expression to southern Italy, and the aforementioned space for Slow Coffee. “A place like this is very Italian, because it shows the creativity and innovation that are right in our own, in coffee and in food. But it is also international: in line with the slow coffee trends that are, they are born in America, but we also know how to offer, and that the Italian public can now appreciate it. ”

All-day gourmet experiences also in the IllyCaffè flagships in Milan, via Montenapoleone: coffee-based dishes (such as the cauliflower with baccalà and marjoram and illymisù for sweet) but also no vegans and gluten-free . “It is paradoxical that the history of craftsmanship, sustainability and innovation tells us Americans and not us that we were born and raised in,” says Ceo Massimiliano Pogliani. “But the most sophisticated consumer – ours – can grasp the difference between true marketing and heritage. We are 84 years old, born in the universe of Viennese coffee, meeting place and culture, we have made fundamental innovations to the market, we buy Arabica directly from the producers, paying them 30% more than the current prices so they can grow in sustainable and contributing to the social development of the territories. And we’ve been doing this all the time, not just since it’s been fashionable. We are also launching “personal blend”, a patented device that, through a digital program, prepares aromatic variations signed by the chefs to serve exclusively in their restaurants. It is a similar system for consumers, which allows you to mix the 9 arabic qualities that make up our blend to get customized variations. These are the stories we now have to tell. ” Where? “In the 235 stores we have in the world, first of all – where the emphasis is on Italian lifestyle and the mix of art, design and food – but also through the 100,000 horeca customers (restaurants, bars, clubs) serving exclusively Illy coffee. And then on social, with video campaigns like # thanks4thecoffee where the work of farmers is told and celebrated. We do not have to assume that people know who we are and what we do, and the time to say so strongly and clearly is this. The good thing is that we must not invent stories, but just share the ones we truly have. ”

Athens according to Mr Yatzer