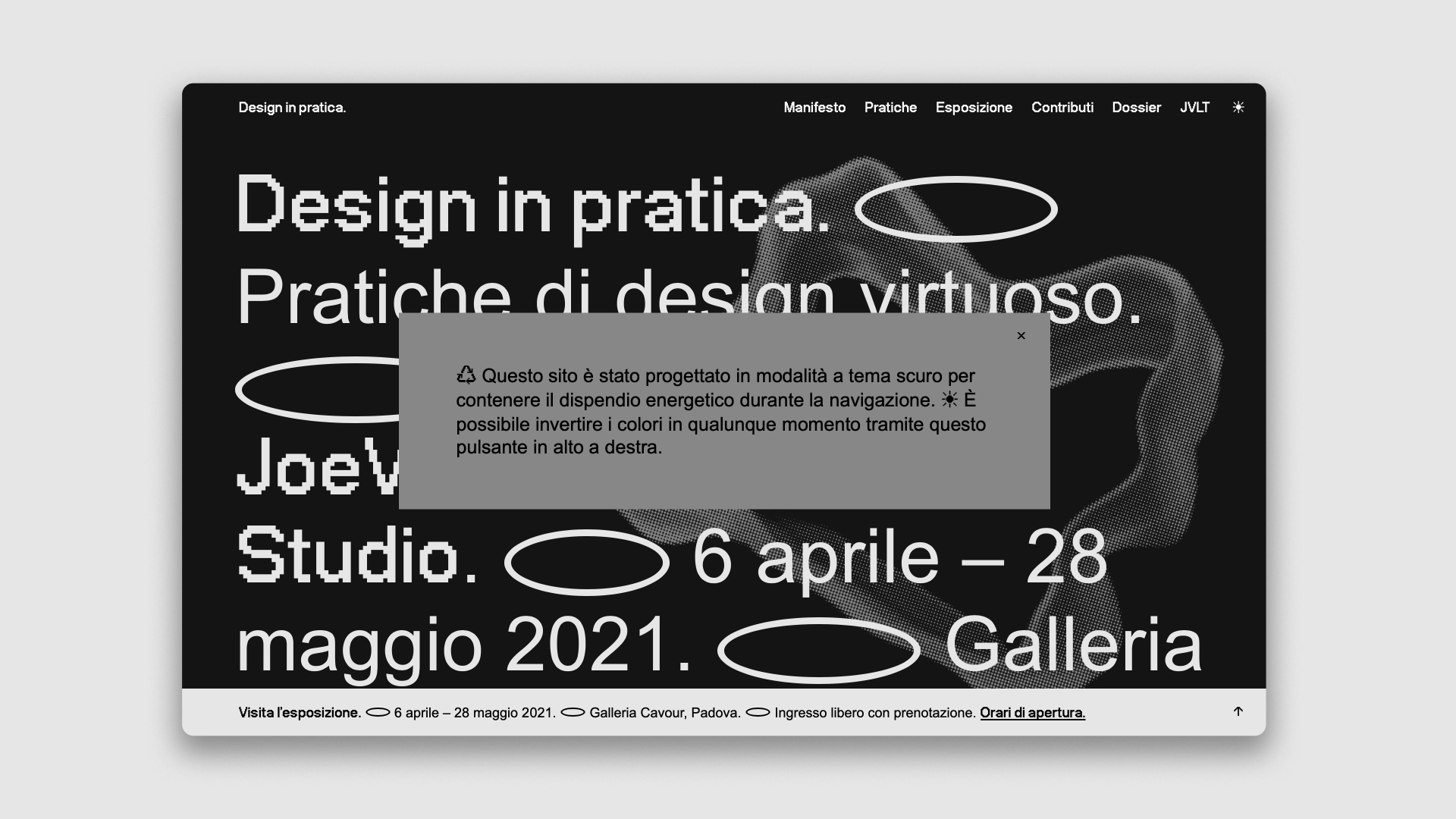 With the exhibition (in Padua and online) Design in practice. Virtuous design practices, JoeVelluto proposes visions and solutions to make design “at its best”. That is from a perspective of sustainability and circular economy.

Exactly ten years ago – in February 2011 – funcooldesign was inaugurated at the Milan Triennale. The exhibition, curated by Oliviero Toscani, in which we at JoeVelluto had actively participated, was designed for those who were convinced that the designer’s work is “fun” and “cool”. And the play on words (“funcooldesign ™” refers to “fancul”, fuck off) was the critique, not at all veiled, of a design made of nothing: gossip, aesthetics (cosmetics), marketing, communication campaigns: a parable, in short, against everything that prevails over the project and its meaning.

Ten years later, here we are, again Sonia and I, celebrating the twentieth anniversary of our JoeVelluto studio. We decided to do it with another exhibition, Design in practice. Viruous design practices. The exhibition, curated by Leonardo Caffo, will open in Padua on 6 April, and is sponsored and hosted by the Municipality of Padua with the support of UBI Unione Buddhista Italiana.

If in 2011 we wanted to send a certain way of doing design to “funcool”, now we have made peace. Stimulating questions by provoking is no longer enough for us, we prefer to reflect by proposing visions and solutions.

Design in practice. Practising Design is therefore a reflection on the ability and strength of design to inspire consciences and guide habits: design as a virtuous life practice.

The starting point and inspiration for the exhibition is the Buddhist Eightfold Path, a practice already very close to JoeVelluto. Eight points for a more responsible and aware life, which applied to design can generate virtuous behaviors and products. The eight points were also a source of inspiration for the exhibition design project, and led to the creation of eight video installations, developed in collaboration with Fabrica. Each of the video installations tells or emphasizes principles that, even before being applied to the practice of design, should guide us on our path to be human.

Responsibility, social perspective, sustainability, economy and circular design, respect for the environment and for every existing form – are some of the issues addressed as a consequence of virtuous behavior.

The exhibition will also be available online via the dedicated website-platform www.designinpratica.it. A digital container, which will remain active even after the exhibition is over, in which it will be possible to consult video interviews (including Lorenza Baroncelli (architect); Oliviero Toscani (photographer); Formafantasma (designer); Joseph Grima (director of Eindhoven Academy); Emanuele Coccia (philosopher, writer); Parasite 2.0 (architecture studio); Cristiano Seganfreddo (director of Flash Art); Giovanna Massoni (curator); Laura Traldi (journalist); Massimiliano Ventimiglia (CEO H-Fam Education and mentor of Fabrica of the Benetton Group) and dossiers that will allow you to deepen the issues developed at 360 °. The site is designed in dark view and made only in black and white (thanks to the help of Daniele Coletti and Marco Selmin), like all the coordinated image of the exhibition with the aim of using as little energy as possible.

We certainly don’t want to change the world, but we certainly want to propose a different and more conscious way of living. Even in the little things. That’s why when we saw the new Formafantasma site, which has always been very close to a certain way of doing design, we were pleasantly surprised (and it was a confirmation) – and an exchange of words between us on whatsapp followed.

The more we move in this direction, the more awareness we generate, beyond sterile and useless controversies, typical of this world. Today we believe that design is indeed a powerful tool. But first we have to work hard on ourselves as people to become honest designers. Let us always remember the first sentence of the preface of “Designing for the real world” by V. Papanek: “Of all professions, one of the most harmful is industrial design”. This does not mean abandoning this profession but rather doing it at its best.

So design in practice, not in theory.

Linkedin
Speaker's Corner is a space to express opinions and ideas.
If you would like to contribute please write to: laura@designatlarge.it arrow_forward

Cento3: an unpublished project by Achille Castiglioni was born thanks to 3D printing